After the United Nations completed an investigation and compiled a 400+ page report, North Korean Dictator Kim Jong-Un and his security chiefs of State stand accused of atrocity and crimes against humanity.

UN Chairman Michael Kirby stated in a press release issued on Monday, Feb. 17th-in Geneva,  that the actions of the Kim Jong-Un and those who worked under him in the DPRK (The “Democratic” Peoples Republic of Korea) are equal in scale and scope of those committed by Nazis during World War II.

“The gravity, scale and nature of these violations reveal a state that does not have any parallel in the contemporary world.”

Included within the  United Nations report regarding the crimes for which the totalitarian, fascist, and nationalistic North Korean security forces of Kim Jong-Un will most likely stand trial are “Descriptions of crimes such as “extermination, murder, enslavement, torture, imprisonment, rape, forced abortions and other sexual violence, persecution on political, religious, racial and gender grounds, forcible transfer of populations, enforced disappearance and the inhumane act of knowingly causing prolonged starvation,” the report adds: “Crimes against humanity are ongoing in the [DPRK] because the policies, institutions and patterns of impunity that lie at their heart remain in place.”- United Nations, February 17, 2014.

Murders are estimated to be hundreds of thousands.

North Korea’s prison and political camps in which citizens have been detained without trial have a striking similarity to those of Nazi Germany; all of which have been under the radar and without recourse, until now.

The United Nations says that in North Korea: 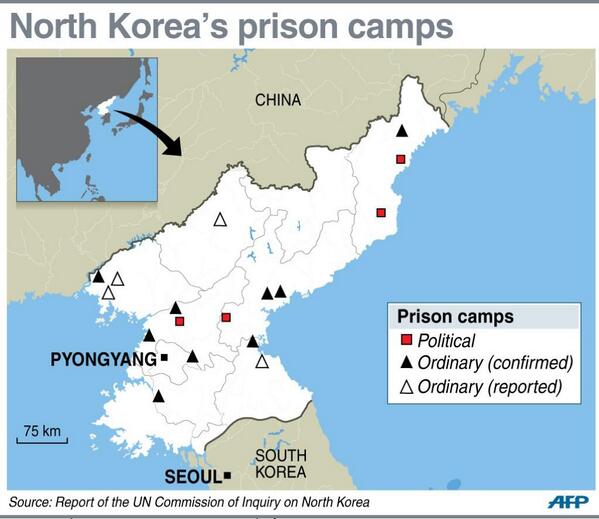 The UN conducts various world-wide investigations of war crimes and crimes against humanity with the most recent in Syria; President Assad and the Syrian regime (who are fighting to maintain Shite/Alawites’ power) violated the Geneva Convention in September 2013 by using chemical weapons against the Syrian people (Sunnis and the rebel forces).  President Assad first denied any government involvement or possession of chemical weapons, but when faced with the prospect of military force from the United States, Syria agreed to destroy the remaining chemical weapons, though President Assad continued to deny any wrong-doing.  President Assad controls the Syrian media and the information provided to the Syrian people, and claims that outside terrorist groups (funded by the United States) are perpetrating violence against the Sunni rebels. (Though physical evidence collected by the UN discredit Assad’s claims.)

The Syrian violence continues and is escalating once again. In an attempt to reach starving Syrians, United Nations forces had to retreat from bringing food to the starving when faced with threats of violence waged from the Syrian government. Senator John McCain, (R) AZ has suggested the United States revisit a call to action against the Syrian government regime. The statements McCain issued on Feb. 16th- were met with much opposition from a war-weary skeptics.

(If Sen. McCain had suggested diverting already existing and paid-for military resources from Afghanistan to Syria and North Korea, instead of beginning a brand new unpaid-for war, he have rallied more support.)

Kim Jong Un categorically denies the existence of these prison camps, any knowledge of the crimes for which the state is being accused and it is likely, given North Korea’s overwhelming reach and media control, Korean citizens are also currently unaware of the accusations against him and his security forces. However, Jong Un admits to executing his own uncle, December, 2013, (who was a direct threat to his throne) then also admitted to having his uncle’s blood relatives, including women and children- executed last month in January.

The controlling of information and a unified media conglomerate (whether under government control, or corporate) are common denominators in how dictators or otherwise powerful entities are able to remain in power and effectively mislead their people.

Russia: “Nothing to see here.”

During the Sochi’s Olympic Opening Ceremony, there was a small glitch within the display of the Olympic rings, and while through-out the world the glitch was visible, it was edited out as it aired in Russia. In fact, as USA Today, Feb. 8th, 2014 points out, the footage was altered and enhanced for the Russian audience. If the Russian government sought to control and manipulate this small glitch, it begs the question: “What other pieces of information is the Russian government manipulating?”

The Russian government has sided with President Assad in his actions against the Sunni Syrians and rebel forces, which is causing further tension between the United States and Russia, as well as other countries represented in the United Nations who wish to see action.

The UN, alone has been ineffective at stopping the sectarian violence in Syria and needs neighboring countries and countries with military might to enforce laws of Geneva Convention.

China and Russia support the Syrian government’s position by blocking the UN’s efforts to intervene.

Regarding North Korea, China also faces scrutiny and possible action, as it was discovered by the UN amid its investigation of North Korea, that China knowingly extradited North Korean escapees/refugees back to be executed.

The dynamics between world powers is tense as the UN calls for action.

What is the United States’ role as international peace-keeping waters are muddied?

This remains to be seen.

Most Americans do not support further foreign entanglements. Many key nations (Turkey, Israel, Jordan, Iran, Russia-regarding Syria and Japan and China regarding North Korea) are equally divided on which path to take and who will lead the effort.

It would seem ALL are looking to the United States to “do something about it”.