MUNCIE, Indiana (NEWS) – We enjoy the polls we receive from Gallup at Muncie Voice because it helps define trends occurring within the United States. For instance, American’s views about the Affordable Care Act (Obamacare/ACA) has fluctuated over the past year. The highest disapproval was during the media storm surrounding website issues with the national Health Care Exchange.

We’ve also noticed, on occasion, their analysis of the data appears ‘white-washed’, but maybe it’s just a matter of opinion. When we received the recent poll about American’s view on Obamacare, and read the analysis, well, it comes across more like denial than anything else.

The title of the poll reads, “Despite Enrollment Success, Healthcare Law Still Unpopular”. The subtitle reads, “Affordable Care Act is most popular among blacks, least among whites”.

The overall response says 51% of Americans still ‘disapprove’ of the ACA, while 43% now ‘approve’. The trends of those disapproving are declining while the trend for those approving are increasing. This is a good thing and we fully expected this would happen once the well-funded corporate lobbyists (republican lawmakers) and the well-paid public relation outlets (U.S. Media), stopped waging their disinformation campaigns 24/7 on cable news and in the newspapers. We expect both trends to continue as more people learn the truth about the ACA.

The analysis by Gallup states, “Approval of the healthcare law is intimately tied to a person’s politics, with 79% of Democrats approving versus 8% of Republicans.”

Why are so many republicans (8%) opposed to providing financial security to Americans and assisting citizens with gaining access to our healthcare system at the least expensive entry point?

Most people understand that adding more people to a group insurance plan lowers the cost for everybody involved since you disperse the costs among a greater number of people. These are common sense mathematical realities.

Why would your political affiliation make a difference to your opinion toward a program knowing full well it’s a positive experience for all of society. Collectively, we’ll pay less in premiums and our health will improve because our entire healthcare system will focus on prevention of disease versus fixing the consequences of untreated diseases. Common sense.

Why would your voting preference dictate whether you approve of these benefits to society?

Gallup’s next point of analysis is:

“Race and ethnicity also play some role in approval of the Affordable Care Act. Non-Hispanic white Americans are, by far, the least supportive of the law, with 35% approving. By contrast, 76% of black Americans approve of the law, while less than a fifth disapprove. Meanwhile, 57% of Hispanics — a group intently targeted by the law — approve, and one-third disapprove.”

So, basically, we have white people who disapprove of fixing runaway healthcare costs in this country because they think it benefits minorities. The same white people also disapprove because it will benefit the same minorities who mainly vote for democrats.

Is this how you interpret the poll results?

In Indiana alone, according to 2010 Census data, 86% of Hoosiers are white. Based on a population of 6.6 million Hoosiers, we have 5.7 million white people and .9 million people of colour.

According to a Medicaid Fact Sheet provided by Cover Indiana website, there are 880,000 Hoosiers who had no insurance.

Is it possible that every one of those lacking health insurance were non-white?

No, of course not.

We all took simple statistics in high school. Again, using the Census Bureau numbers, if 880,000 Hoosiers lacked health insurance, about 14% would be non-white, or 123,200.

When Mitt Romney tells a private room of rich white people who 46% of “those people” benefit from Obamacare, not only is he demonstrating his ignorance of simple mathematics, but he’s insulting the intelligence of those 1%’ers in the room who were writing checks for his presidential campaign.

The conservative media forces have convinced an entire political party (mostly white republicans) that the Affordable Care Act is designed to help minorities who are ‘lazy and unworthy’ – a group of people who ‘vote for democrats because they receive entitlements in return’. Even on their best day imaginable, the minority population only accounts for 14% of the U.S. population so they cannot elect a president by themselves, even if each one of them voted.

These conservative media propaganda machines get paid very well to convince an American populace to ignore fundamental statistics, and believe that Obamacare was just another “entitlement” program designed for minorities rewarding them for ‘voting for a black president’.

We cannot figure out which is more sad, a media industry which has sunk to the low levels of peddling propaganda for dollars, or an American society which has become so dumb, or so lacking of basic critical thinking skills, that they take the racist bait, hook, line and sinker. 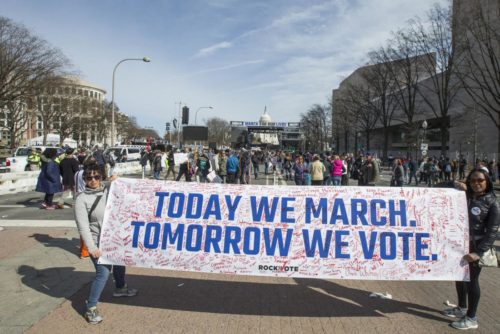 March for Our Lives will Generate Spark of Transformation

The Perils of the Absolute